An unexpected visitor – Leishmaniasis in Australia

Australia has long been thought to be free of Leishmania but the recent discovery of a new species infecting kangaroos, and other macropods, has prompted a re-think. In work, recently published in the International Journal for Parasitology, Annette Dougall and colleagues from the Menzies School of Health in Darwin set out to answer how this parasite is being transmitted from host to host in Australia?

Leishmaniasis is an ugly disease. It brings death or horrible disfigurement and permanent scarring. It has been with us for much of our history and has inspired the same fear and loathing as diseases like leprosy, elephantiasis and small pox. It is caused by a unicellular parasite called Leishmania. After the initial infection the parasite takes up residence inside the cells of its mammalian host and, unless treated, can quickly kill. If it infects the liver or other organs it causes a potentially fatal, malaria-like fever. If it infects the mucosal surfaces inflammation can swell the airways shut and asphyxiate the host. The mildest form of the disease results in painful ulcerations, sores and permanent scarring over large patches of skin. Leishmaniasis is a terrible disease and one that is still very much with us today. 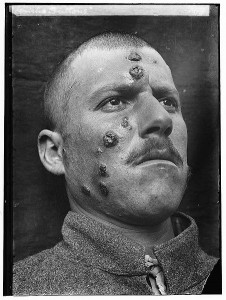 Like malaria, leishmaniasis is spread by blood sucking insects. These organisms, the shared needles of the natural world, transmit blood-borne pathogens amongst the organisms they feed on. Parasites like Leishmania and Plasmodium, the organism that causes malaria, take advantage of these insects as a way of spreading from one host to another. They have evolved specialised life stages for the host and the insect (in technical terms a vector) and have developed a variety of tricks to ensure their transmission. In the case of leishmaniasis, a particular species of sandfly transports the parasite from host to host. Often the hosts are dogs, sloths, opossums and other mammals, but all too often they are humans, and leishmaniasis is, after malaria, the second-largest parasitic killer in the world.

Leishmania has been with us for a long, long time. The distinctive lesions or fever caused by leishmaniasis makes it easy to identify the disease in historical writing. The earliest known report is from the7th century BC, during the reign of the Assyrian King Ashurbanipal. This king, although known for keeping defeated enemies in dog kennels, was also a scholar and these reports were likely transcribed from sources as far back as 2500 BC. Leishmaniasis was also described as Balkh sores by Muslim physicians in the tenth century AD, Kala-azar (literally black-fever) by Indian physicians and, in an odd choice of decoration, depictions of lesions and deformed faces have shown up on Incan pottery from the 1st century AD. 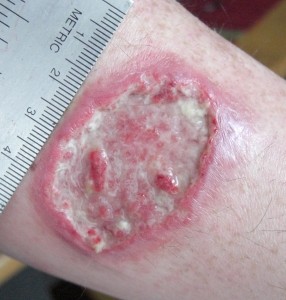 Leishmaniasis ulcer on forearm (from Wikipedia)

The parasite itself was first identified and linked to the disease around the turn of the 20th century. As usual, who discovered it first is disputed. Claimants include a surgeon major from the British Army,a Russian military doctor and a Scottish pathologist. Ultimately the first identified species of Leishmania was named after two British Army officers, William Boog Leishman and Charles Donovan, who described the parasite within a month of each other in 1901. Since then Leishmania donovani has been joined by thirty more species known to infect mammals, twenty-one of them also infecting humans. In a lesson for modern researchers the Russian military physician, Peter Borovsky, first discovered, described and connected the organism to the disease but was passed over for publishing his findings in an obscure, low impact, russian language journal.

Today leishmaniasis is primarily a disease of the developing world. Outbreaks do occur in developed countries and in some animals Leishmania appears to be expanding into areas formally free of the disease. For instance, canine leishmaniasis has been moving up the eastern coast of America as far north as Canada. This is a cause for concern as Leishmania is sometimes able to leap from infected animals to humans. An increase in infected animals increases the chance that it will spread to humans.

Despite its widespread distribution the countries of the Pacific, including Australia, have remained free of the disease. Mainly, it was thought, because of the lack of a suitable insect vector for the transmission of the parasite from host to host. Contrary to what most Australians think Australian sandflies rarely, if ever, bite humans. Most bites are actually from species of midges, small robust insects with piercing and sucking mouthparts not known to be vectors of Leishmania. So it came as something of a shock to scientists when, in 2003, Leishmania was discovered in kangaroos in the Northern Territory of Australia. Even more surprising was the parasite appeared to be a new species not previously identified anywhere else in the world. 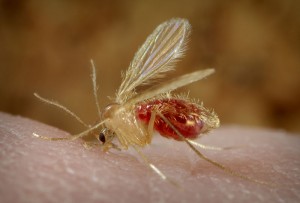 Given the presence of the parasite what was the vector? This is the question Annette Dougall and her colleagues set out to answer. The team began their search for Leishmania in sandflies around the areas that infected kangaroos were found. Several species of sandfly do exist in Australia and as they are the only vector so far identified for Leishmania this seemed a reasonable starting place. To identify insects infected with Leishmania they utilised a technique familiar to viewers of CSI, the polymerase chain reaction or PCR. They purified DNA from the insects and amplified specific fragments of parasite DNA using the PCR. The amplified DNA was then taken off and sequenced. If the sequence of the amplified DNA was the same as the parasites this indicated that parasite DNA was mixed in with the insect DNA. The only way this could happen was if the insect was infected with Leishmania.

The sandflies are night feeders so to trap them the team went hunting at night with light traps, sticky traps and white sheets lit up by incandescent lights. A large number of insects were caught, sorted and the sandflies tested for Leishmania. In the end more than 3000 sandflies were collected and approximately 1800 were screened. Unfortunately, not a single sandfly was found to be positive for Leishmania. Another insect, a night feeding midge, was also abundant in the traps and these organisms were also tested and found to be free of Leishmania. Finally, members of the team noticed that during the day the tails of the kangaroos were heavily infested with a species of midge. These day-feeding insects were collected from the tails of the kangaroos and finally positive results were obtained. After screening, approximately 15% of these day-feeding midges were confirmed as positive for Leishmania. A result that was painstakingly confirmed by dissection and positive identification of the parasite in the gut of the insect.

The discovery of Leishmania in Australia and now the discovery of a novel vector by Annette Dougall and her colleagues both have enormous implications for Australia and for the control of Leishmaniasis worldwide. Is this species able to infect humans? Are there undiagnosed human cases of leishmaniasis in Australia? Can importedLeishmania get a foothold in Australia? Will bed netting stop a day-feeding vector? Can all species of Leishmania also use midges as a vector? And what implications does this have for control of leishmaniasis worldwide? Like all good research more questions have been raised by this work than have been solved. A quick google search shows that in recent years we have seen outbreaks of leishmaniasis in Texas (2007), Israel (2005) and the Sudan (2010) â€” to name just a few. Answers to the questions posed by this research are of vital importance because, as these outbreaks illustrate, leishmaniasis is as relevant to man as it was during the reign of King Ashurbanipal two thousand years ago.

ASP parasitologists recognised among our nation’s most distinguished scientists
May 25, 2021