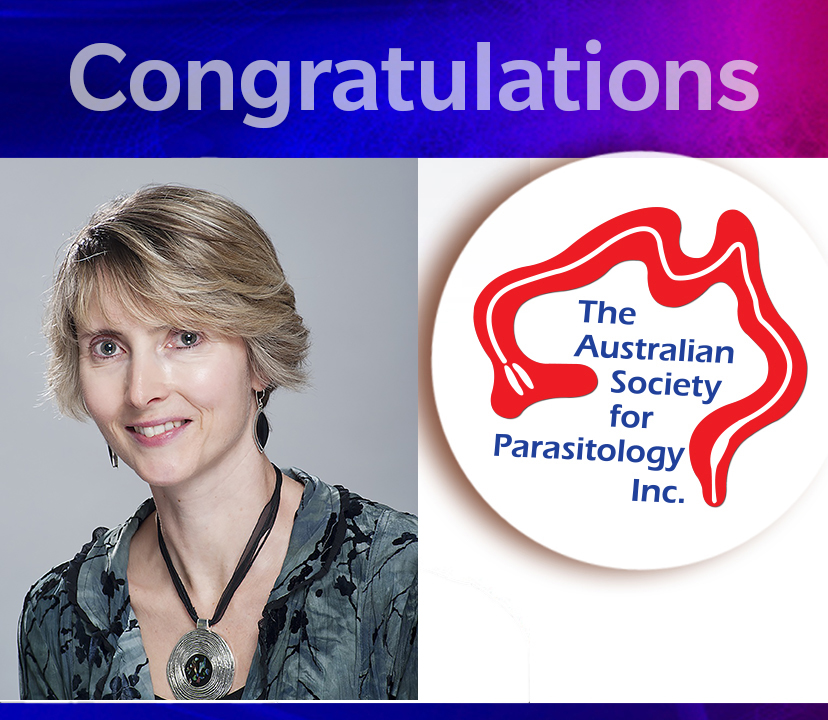 Congratulations to 2021 Fellow of the Australian Society for Parasitology, Una Ryan!

Una Ryan is Professor in Biochemistry at the School of Veterinary and Biomedical Sciences at Murdoch University.

Una is an exceptional leader and mentor. She has mentored over 15 post-doctoral and academic staff and has supervised to completion over 25 honours and 16 PhD students. Her laboratory currently includes one senior lecturer, three postdoctoral fellows, five PhD students, and two honours.

Una has been awarded over 40 research projects valued at >$12M in cash and >$13M in-kind over the course of her career. In addition to success with the National Health and Medical Research Council (NHMRC) and the Australian Research Council (ARC), particularly Linkage grants, Professor Ryan played a key role in the formation of the ARC/NHMRC Research Network for Parasitology (awarded over $2.4 million for 5 years beginning in 2004). Una has served on the Network Executive Committee ever since, helping to revitalise and further the aspirations of Australian parasitology, especially the development of its young researchers.

Una has converted that funding into over 314 papers (more than 125 published in the last 5 years), which have been cited more than 13,157 times. She has published with over 220 co-authors. Una has a H-index of 59 (ie, 59 of her papers have been cited more than 59 times), and a field-weighted citation index of 1.98 for her research on Cryptosporidium (meaning her research has been cited 98% more than the world average). Una’s prominence in parasitology has resulted in several editorial roles, including Parasitology Research (Co-Editor in Chief 2018-on), Experimental Parasitology (Specialist Editor 2009-on), Guest Editor for a 2010 Special Issue of Experimental Parasitology on Cryptosporidiosis and International Journal for Parasitology (Specialist Editor from 1999-2002).

Una’s research has had a real impact. She was a pioneer of molecular epidemiology, especially of Cryptosporidium, discovering unsuspected environmental and zoonotic threats to human health and suggesting simple, practical ways to minimise these threats. Most startling, perhaps, was her team’s discovery that Cryptosporidium possesses a series of novel lifecycle stages that have more in common with gregarines than other, parasitic Apicomplexa and raising the alarming prospect that Cryptosporidium could reproduce and multiply in fresh water invertebrates. Her work has led to two patents and the development of new diagnostic tests, not just for Cryptosporidium, but also for a range of other parasites to which she has applied her skills in recent years. Her research continues in molecular epidemiology of infectious agents, using the latest genotyping tools for studying transmission dynamics, including using a ‘gut on a chip’ for the detection and viability of waterborne pathogens, and the application of Next Generation Sequencing for studying the microbiome of ticks and environmental samples.

In addition to successful research grants, Una has been the receipent of several high profile honours. In 2001, she was awarded one of Australia’s highest scientific honours, the Minister’s Prize for Achievement in Life Sciences. In 2014, Una was the recipient of the Bancroft-Mackerras Medal from the Australian Society for Parasitology for excellence in research. Una has also received a certificate of excellence in reviewing by Experimental Parasitology in recognition of an outstanding contribution to the quality of the journal in 2012, and in 2016, she received the Vice Chancellor’s Excellence in Research Award for Distinguished and Sustained Achievement at Murdoch University. In recognition for her contribution to the field of protozoan taxonomy, a species of Cryptosporidium was named in her honour; Cryptosporidium ryanae.

Una has been a member of the Australian Society for Parasitology (ASP) since 1989 and during that time she has made a major contribution to the ASP. Una was an integral member of the ARC/NHMRC Research Network for Parasitology Management Committee, valued for her integrity, perception, and compassion. Between July 2017 – July 2019, Una was the president of the ASP and Vice-President from July 2019-2020. In her role as president of the ASP, she helped set the research direction for parasite research nationally. Una was instrumental to driving the 2019 ASP Constitutional changes and the accompanying Principles, By-Laws, and Guidelines, including the Inclusion Principles and Gender Equality Principles, which ensures the ASP achieve gender equality across all its committees. Una has also been a diligent and highly valued “expert faculty member” of the Concepts in Parasitology ASP Course since 2015.

In view of her outstanding contributions to science, parasitology and the Society, Prof Una Ryan is an extremely worthy recipient of the title, Fellow of the Australian Society for Parasitology.