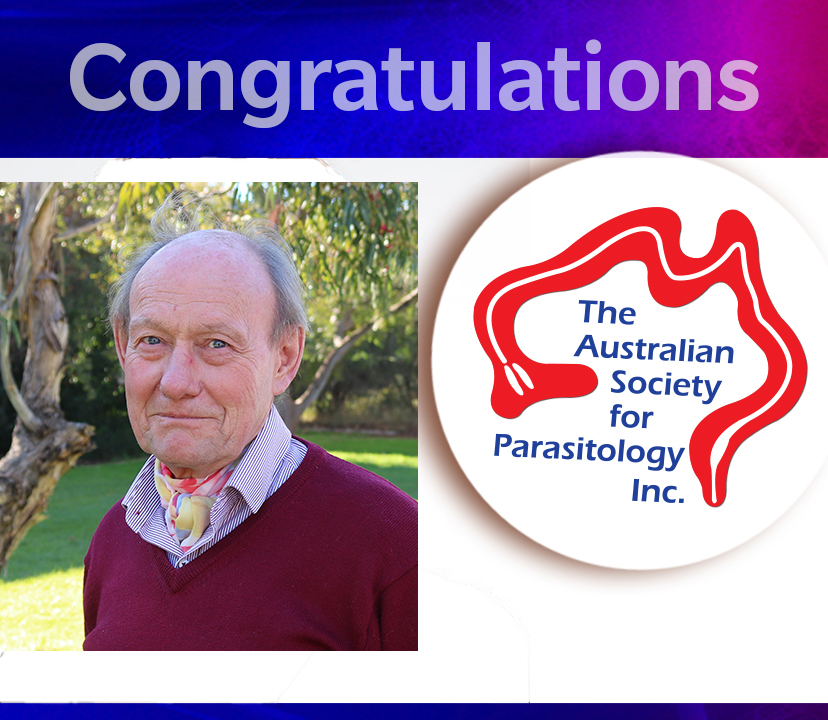 Congratulations to 2021 Fellow of the Australian Society for Parasitology, David Jenkins!

David Jenkins began what is now a 40+ year career as a parasitologist, beginning in the late 1970’s in Java while working on an Australian government-funded aid project. Subsequently, he undertook a PhD with Mike Rickard at the University of Melbourne on serological responses to taeniid cestode infections in dogs. David has been a member of the ASP for almost 40 years, having joined the society in 1981 when he began his PhD studies.  He has been an active member of the Society throughout, attending the majority of ASP’s conferences since he joined and being jointly responsible with Andrew Thompson for organizing the 1996 annual scientific meeting of the Society. David has served as a member of ASP Council for 7 years as representative member for the ACT, Secretary and President of the Society. He has also been involved in teaching terrestrial wildlife parasitology as part of the ASP’s annual “Concepts of Parasitology”course at Kiola, NSW from its beginning in 2014.

Apart from his contribution to the ASP, David has made numerous outstanding contributions to the science of parasitology both nationally and internationally. In what could be considered a more typical academic sense, David has in excess of 100 internationally refereed research papers and book chapters, has attracted numerous research grants and funding from commercial sources, has mentored many honours and post-graduate students, and made many invited and other international and national conference presentations. However, a number of other aspects of his career as a parasitologist set his contribution apart.

David Jenkins could be described as a field parasitologist, a great communicator and a great survivor.  Described by Michael Gemmell as a “gum-boot parasitologist”, a breed of parasitologist that Michael considered was becoming a “threatened species” in Australia. Throughout his career David has been a scientist who gets his hands dirty. He has maintained aspects of his research program which have seen him regularly on-farm, in the bush and at the abattoir doing the practical work as a parasitologist himself.  He established a research program on the epidemiology of echinococcosis in wildlife in Australia, particularly down the eastern seaboard. He revealed the seriousness of Echinococcus granulosus prevalence and intensity in the wild dog and dingo populations in national parks and state forests.  He detailed evidence for the transmission of the parasite from wild dogs to sheep on properties adjoining forest areas and the associated risk for re-establishment of transmission in a domestic cycle of the parasite. David led a hydatid control program in southern NSW and the ACT in which he developed educational materials, supervised program staff, organised and attended schools and community open days often dressed as a black and white dog, appropriately named “Wally” (Wally-the-Wonder-dog), to help promote the hydatid control story to school children and the general public. He provided education about hydatid disease transmission and its prevention for state and federal government feral animal control staff involved in wild dog control mainly in NSW and the ACT but also Victoria. He used his own funds and a small grant from NSW Department of Health to create an educational DVD concerning hydatid disease, its transmission and prevention in Australia. Through a personal friendship, the presenter of the movie was Robin Williams, of the ABC’s Science Show fame. There is no doubt that David’s work in these areas has contributed to a heightened awareness of hydatid disease in rural south-eastern Australia and contributed to a reduction in the incidence of human cystic echinococcosis in Australia, particularly in rural NSW and the ACT.

After a period when David was supported by the NHMRC, he found it necessary to rely on his own resources when that support did not continue. He established a private company, Parasitech.  He was supported by the NSW, ACT and Federal Departments of Health which provided him with some modest funding but most importantly, laboratory and office space in a facility at Fyshwick in Canberra. He was also supported by the ANU which allowed him to utilise laboratory and animal house facilities, for a small fee, at a field station just outside the Canberra city boundary.  Through Parasitech he undertook anthelmintic and acaricide trials in dogs, cats and foxes for a number of international commercial veterinary pharmaceutical companies according to international Good Clinical Practices requirements. The work supported his income and, through his own personal resources he financed his ongoing field and laboratory work on the epidemiology of hydatid transmission in Australia.  More recently, he secured an academic position at Charles Sturt University, where he has continued that work as well as expanding to include a wide variety of other research topics in the area of parasitology.

David Jenkins’ reputation as a science communicator with the general public is legendary. Hardly a week goes by without a radio or TV station, or film crew, seeking his contribution.  In 1999 he has been awarded the “Unsung Hero Award of Australian Science Communication” by the Australian Science Communicators, the peak body for science communicators and science journalists in Australia with over 1650 subscribers and 450 financial members.  He has represented Australian science, and parasitology in particular, on 5 occasions at Science meets Parliament event held each year in Canberra.

In the light of these contributions to parasitology and the ASP, A/Prof David Jenkins is an extremely worthy recipient of the title, Fellow of the Australian Society for Parasitology.