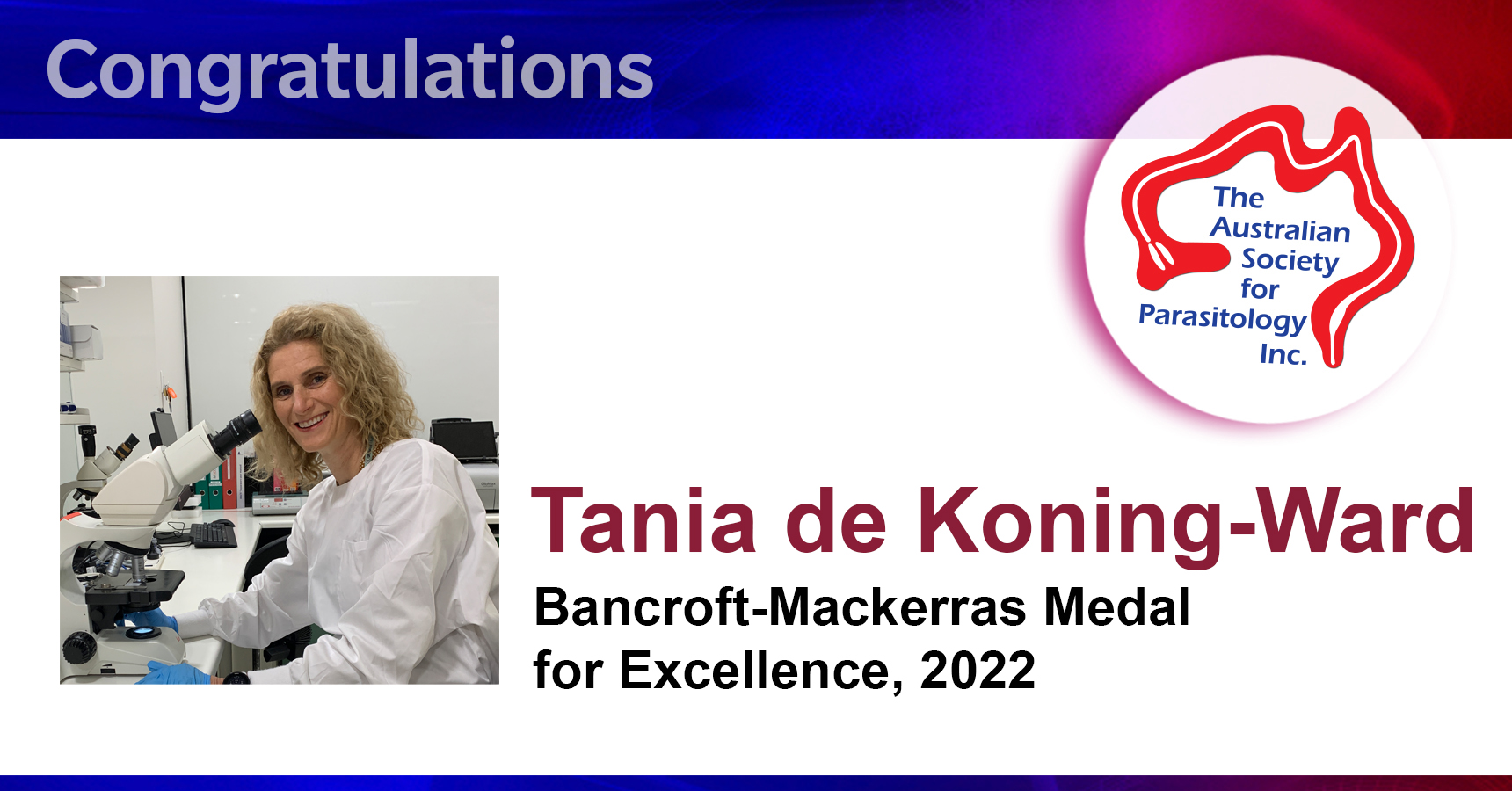 Congratulations to Professor Tania de Koning-Ward who was awarded the 2022 Bancroft-Mackerras Medal for Excellence from the Australian Society for Parasitology.

Professor Tania de Koning-Ward has made a substantial contribution to knowledge in the field of malaria, in particular to understanding the molecular basis for key events in the parasite’s life-cycle. The work has the potential for wide reach impact – informing the development of new approaches to prevent and control malaria – a disease that causes more that 200 million cases and hundreds of thousands of deaths each year.

Professor de Koning-Ward’s work is regularly published in outstanding international journals and is consistently highly cited. This is testment to the signifinace of the discoveries that Professor de Koning-Ward and her team have made. Most notably, Professor de Koning-Ward’s pioneering work in understanding how malaria parasite proteins are exported is very widely recognised, with several publications in Nature and other pretigeous journals being just one indication of its significance. Moreover, her extension of this work to understand the essential roles of some of these unusual exported proteins, in particular their role in obtaining essential nutrients and in modifying host cells, must be highlighted, as much of this work is paradigm shifting.

As testimony to the quality and impact of her research, Professor de Koning-Ward has been awarded an NHMRC Howard Florey Centenary Fellowship in 2000 and a NHMRC Career Development Fellowship Level 2 in 2010. As the top ranked Fellow nationally, Prof de Koning-Ward was the recipient of the Commonwealth Health Minister’s Award for Excellence in Health & Medical Research in 2011, probably the most prestigious mid-career award in health and medical research in Australia. She is regularly invited to present her work at major international meetings and to contribute to commenting on and reviewing key aspects of malaria biology in prestigious journals.

Central to Professor de Koning-Ward’s research is the utilisation of sophisticated conditional gene knockdown tools to mechanistically dissect the function of essential parasite genes. Her research program is one of few worldwide with expertise in both human and rodent molecular transgenesis systems; this has provided the powerful opportunity to study the functions of essential P. falciparum proteins in vitro, combined with malaria infection in mouse models to study host-parasite interactions in vivo, including malaria pathogenesis and immunity.

Professor de Koning-Ward is an exceptionally worthy winner of the Bancroft-Mackerras Medal.