Congratulations to 2022 Fellow of the Australian Society for Parasitology, Donald McManus 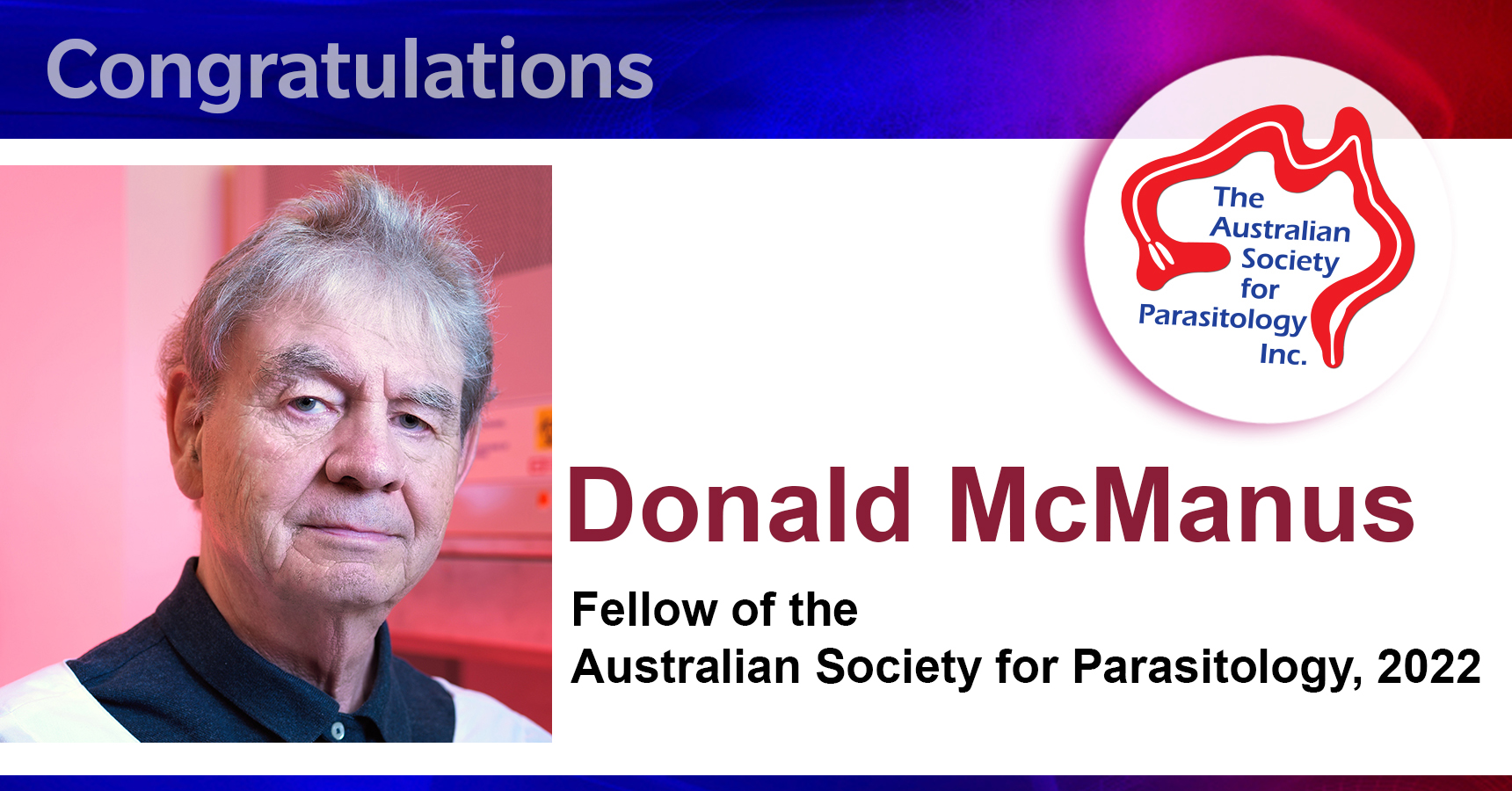 Congratulations to 2022 Fellow of the Australian Society for Parasitology, Donald McManus!

Don received his PhD in 1973 from the University of Wales, UK, and was awarded a DSc in 1996 from that same Institution.  After the award of his PhD, Don was appointed as a Research Fellow and Lecturer at Imperial College in London, where he worked closely with Professor Desmond Smyth, a key figure in the establishment of the Australian Society for Parasitology and the International Journal for Parasitology. It was at Imperial College that Don was introduced to Echinococcus the agent of hydatid disease in humans and animals, providing the framework to develop his later research into the molecular biology and immunology of these and other helminth parasites. In 1984 he worked at the National Institute for Medical Research at Mill Hill in Dr Ron Smither’s laboratory with Dr Andrew Simpson where he developed new skills in the fledgling sciences of molecular biology.  Don’s laboratory was the first to construct cestode DNA libraries, and he cloned the first Echinococcus genes.

In 1989, Don moved to the Queensland Institute of Medical Research as Director of the Commonwealth Tropical Health Program. There he initiated pivotal PCR/direct-DNA sequencing for identifying genetic variation in helminth parasites, and for constructing molecular phylogenies for Echinococcus, and other flatworm species. At QIMR Berghofer, Don established the life cycles of two schistosomes commencing a long period of research into these important parasites.  .

Among the many outcomes of Don’s career have been the description of the complete genomic sequence of S. japonicum and the draft genomes of Echinococcus granulosus, Schistosoma bovis, the snail Biomphalaria, and Paragonimus westermani. Don’s extensive research into the epidemiology of Schistosoma japonicum highlighted the importance of water buffalo in sustaining the zoonotic life cycle in China.  This work enabled the implementation of a range of One Health advances that has led to significant reduction in transmission and near elimination of the parasite in endemic regions of that country.  Don’s studies into functional biology of proteins expressed by Schistosoma and Echinococcus have led to numerous discoveries of proteins tested as candidates for vaccination, diagnostics and therapeutics of parasitic and other diseases.

Don has published > 600 papers in journals including Nature, Nature Genetics among other  leading journals, with an all-time H index of 97 and with more than 39,000 citations.  He is an editorial board member of 13 journals, a board member of the RNAS (Schistosomiasis) and WHO steering committees on schistosomiasis, zoonoses and marginalized infectious diseases of poverty.  He advises various authorities in Asia and the WHO on health issues impacted by schistosomiasis and other helminthiases and provides advice to Ministries of Health on control options for these diseases.

Prof McManus has mentored approximately 40 PhD students, over 40 post-doctoral fellows and numerous Masters and Honours students from Australia and internationally.  Two of his PhD students have previously won the Australian Society for Parasitology Sprent Prize for best PhD theses. Many of his former students and postdocs have senior positions in academia or industry.

He is an Honorary International Fellow of the American Society of Tropical Medicine and Hygiene, honorary member of the American Society of Parasitologists and the British Society of Parasitology, Fellow of the Society of Biology (UK).  He has won the Ralph Doherty QIMR Prize and the Sornchai Looareesuwan medal for his excellence in experimental and clinical tropical medicine research. He was awarded he was awarded the 2020 NHMRC Peter Doherty Investigator Grant Award (Leadership) which recognises the highest ranked application in the Emerging Leadership and Leadership categories of Investigator Grants.

Don has been a member of the Australian Society of Parasitology since arriving in Australia and a regular participant in the Annual conferences of the society.  Don has been an active collaborator with many society members.

In view of Don’s sustained contributions to Australian parasitology over thirty years, we consider Donald Peter McManus a worthy recipient of the title Fellow of the Australian Society for Parasitology.