Congratulations to 2022 Fellow of the Australian Society for Parasitology, David Emery 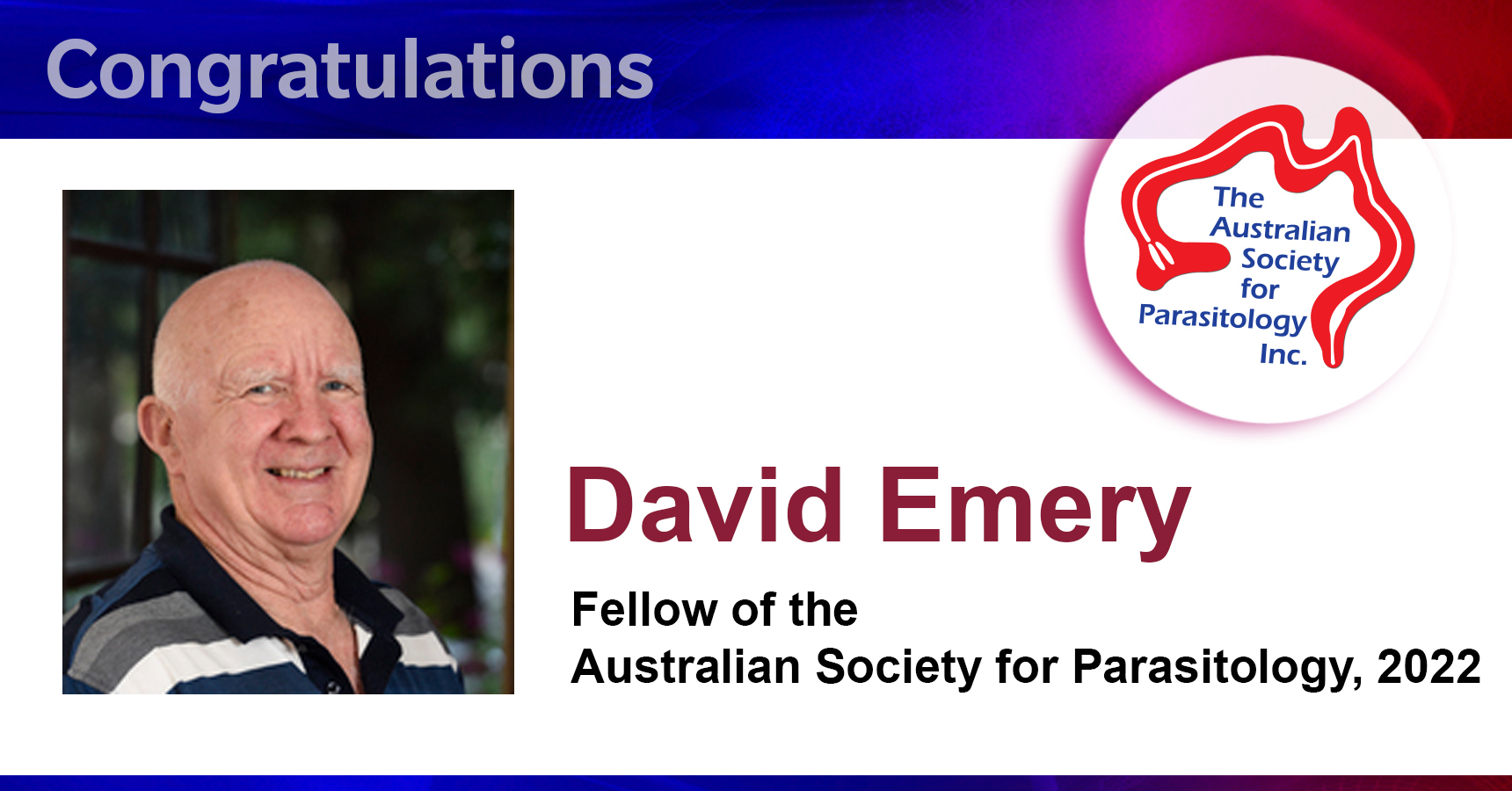 Congratulations to 2022 Fellow of the Australian Society for Parasitology, David Emery!

David has made an outstanding contribution to parasitology and parasite immunopathology through his extensive scientific publications, his role as a teacher at the University of Sydney and his role within the Society.

David has published 135 papers in refereed journals and ten book chapters across a wide range of parasitological and immunological topics. David graduated from the University of Sydney with BVSc, but his early interest in research was sparked through completion of BSc (Vet) during his veterinary degree program. David’s genuine interest in immunology led him out of veterinary practice to complete his PhD in transplantation immunology at the Australian National University. David soon recognised the opportunities that infectious agents such as Theileria provide for understanding the of cell-mediated immune response while working at ILRAD in Kenya on Theileria. Curiosity led him to repurpose his transplantation experience to discover the major immune response mechanisms in cattle that recovered from East Coast Fever caused by T. parva. It is quite poignant, that David is now leading research into Australian Theileria research and vaccine opportunities funded by major industry bodies, because he demonstrated that immunisation of calves is a viable option to prevent or reduce the severity of the disease and production losses.

On his return to Australia to the CSIRO Division of Animal Health. David’s critical contributions were in the demonstration of immunological mechanisms during trickle infection of neonates with Haemonchus contortus and Trichostrongylus colubriformis. David’s emphasis was on maintaining animal models and experimental facilities for the development of novel surgical approaches to enable the study of ovine mucosal immunity.

As program manager in the CRC for Vaccine Technology he investigated range of vaccine delivery systems, ranging from recombinant subunit moieties in a range of adjuvants to DNA, live attenuated vectors and slow, sustained release devices and participated.

In 2002, he joined the Faculty of Veterinary Science now Sydney School of Veterinary Science, Faculty of Science at the University of Sydney, initially as a senior research fellow and then as Professor of Veterinary Immunoarasitology, the position he currently holds. David was the subprogram leader for the Host Resistance to Internal Parasites subprogram in Sheep Genomics within the University of Sydney funded by Meat & Livestock Australia and Australian Wool Innovation. As part of his activity, he has obtained grants worth more than $A3 million, managed in excess of >$A10 million and been involved in research culminating in three international patents. At the University of Sydney, he forged a strong collaboration with Yarrandoo R&D Centre (Elanco Animal Health).

Apart from undergraduate teaching in parasitology and immunology, and supervising 13 post-graduate students, he was also Pro-Dean in the Faculty of Veterinary Science from 2010-2014.

David has been a member of the society for many years, Treasurer from 1994-1995 and was President from 2015 to 2017. One of David’s most significant contributions to the Society was bringing the veterinary textbook to fruition. Although David insisted that all authors (and editors) be listed in alphabetical order, it was David who, over a six month period, devoted most of his time to getting the book finished and available for students from first semester the following year.

In view of David’s sustained contributions to Australian parasitology we consider David Emery a worthy recipient of the title Fellow of the Australian Society for Parasitology.