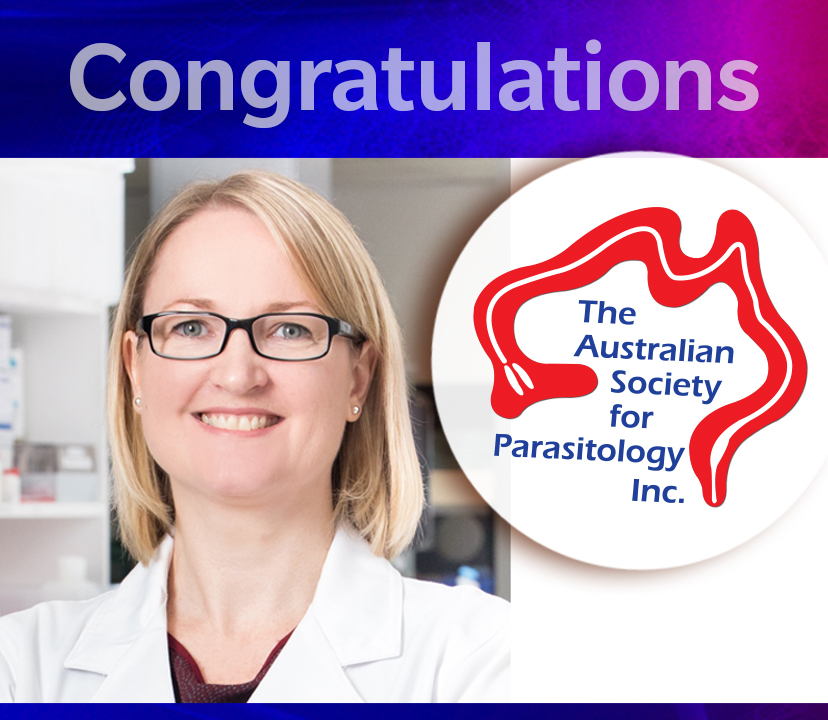 Congratulations to 2020 Fellow of the Australian Society for Parasitology, Katherine Andrews!

Professor Katherine Andrews is head of the Tropical Parasitology Group at the Griffith Institute for Drug Discovery and currently Acting Director of the Institute.

Katherine is a leading expert in the field of early phase antimalarial drug discovery and is committed to trying to improve the lives of people who suffer from this significant global health issue.

She leads research under two key research themes. The first focuses on the discovery and development of new drug leads for malaria prevention. Under this theme (funded by two current NHMRC Project grants on which she is CIA; ~$1.2million) she leads a team that is developing novel malaria prevention drug leads from a unique CSIRO chemical compound library comprising largely novel structures not previously reported in the literature. This is important, as any new drugs developed for malaria should ideally be different to those used currently in order to kill the parasite in new ways and to limit potential issues of cross-resistance with existing drugs. The second theme, focuses on the discovery and development of potential treatment drug leads, including novel fast killing chemotypes (NHMRC Project grant as CIA; ~$800K) and compounds that target epigenetic regulatory enzymes.

Katherine is an internationally recognised scientist and has published >97 articles and has also been very successful in obtaining research funding. She has been CI on a range of grants from various funding bodies including NHMRC, ARC and Gates Grand Challenges totaling ~$14.6M.

Katherine is an outstanding science communicator, having been involved in public outreach since 2008 and organizing many Outreach events both within her institution and externally. In 2016 Katherine began a project with the aim of bringing STEM careers alive for young children through the development of a series of picture books for primary school children (grades Prep-3) which are simple and engaging and authored by inspiring Queensland women in STEM with a vision to inspire as many children as possible. As the Project Developer and Director of That’s RAD! Science STEM outreach project Katherine has authored/produced books on parasites (Prof Kathy Andrews), nanotech (A/Prof Qin Li), forensics (Senior Sergeant Donna Stewart) and crystal science (Prof Jenny Martin). Impacts include >4000 books to Australian children/libraries and numerous outreach events. Content includes information about the interesting fields of the woman in STEM authors (from a child’s “voice”), fascinating facts, engaging colour graphics and hands-on science experiments.

Katherine has been a champion for women in science and in 2017 was awarded the Women in Technology Life Sciences Research Leader award, which celebrates women that make a “significant contribution to growth and development of their teams and Queensland technology, serving as role models for others”.

Katherine has also been a very active member of the ASP and served as Executive Council Member and Treasurer from 2011-2013 and since 2011 has been an Associate Editor for the International Journal for Parasitology: Drugs and Drug Resistance. She also plays a major role in STEM and parasitology outreach activities.

In view of her outstanding contributions to science, parasitology and the Society, Katherine Andrews is an extremely worthy recipient of the title, Fellow of the Australian Society for Parasitology.

ASP parasitologists recognised among our nation’s most distinguished scientists
May 25, 2021