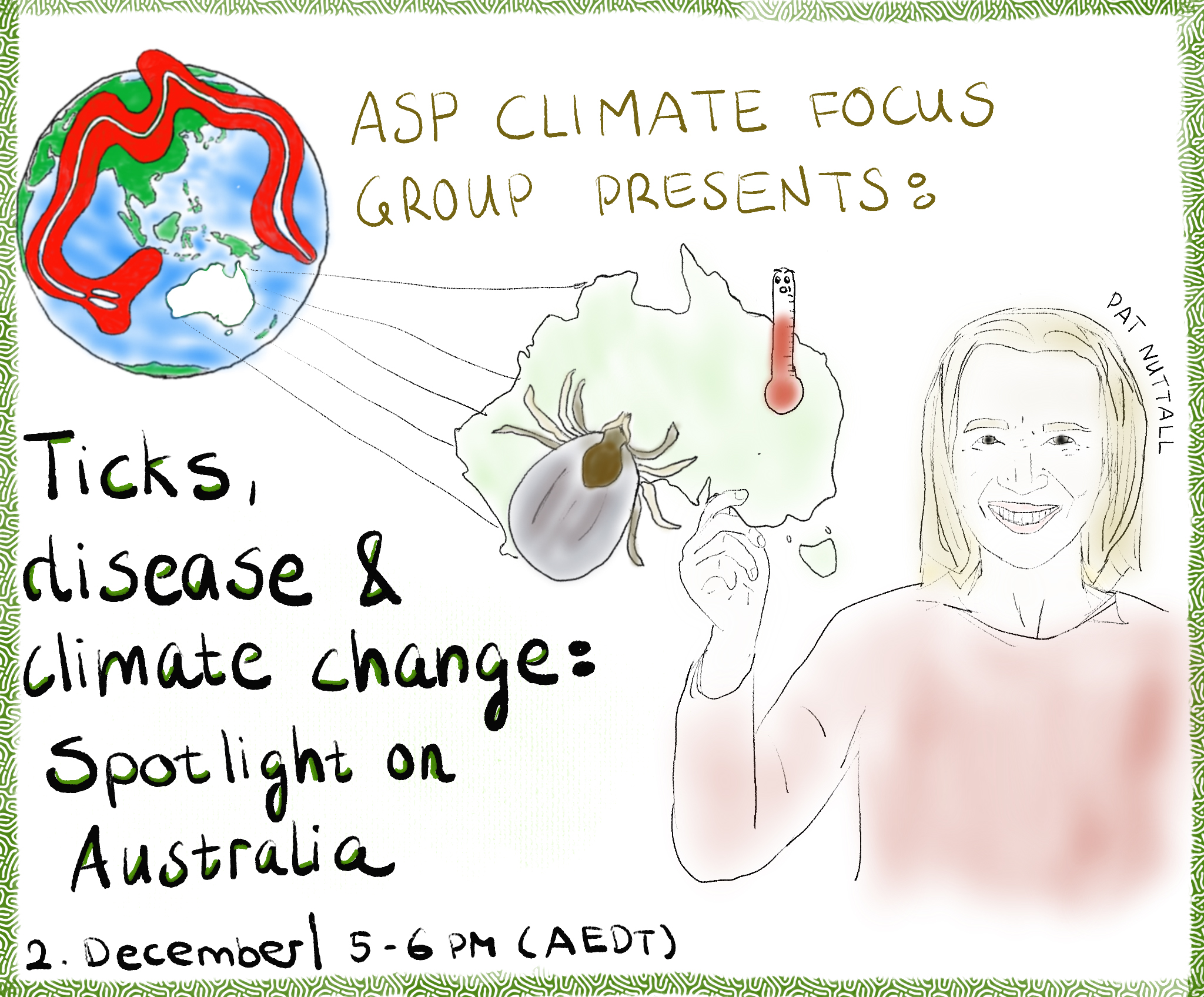 Join our ASP Climate Focus Series seminar 4 “Ticks, Disease and Climate Change: Spotlight on Australia” with Em. Professor Pat Nuttall from the University of Oxford, UK, on Thursday 2nd December, 5:00pm – 6:00pm (AEDT)
Please register for this ZOOM meeting with this link: https://us02web.zoom.us/meeting/register/tZAscO2rqzMtGtCfXOQ9Sd2vACX3ZPiziV5w
After registering, you will receive a confirmation email containing information about joining the meeting, please then add the event to your calendar so that the meeting link is available to you.
During this seminar Em. Professor Pat Nuttall from the University of Oxford will address “Is climate change affecting parasites?” This question will be considered in relation to ticks – blood-feeding ectoparasites which transmit a wide range of pathogens causing disease in humans and livestock, including Lyme borreliosis, tick-borne typhus, anaplasmosis, babesiosis, and theileriosis. If global warming is affecting ticks/tick-borne infections, signs of change should be detectable in: (i) geographical distribution, (ii) development rate of ticks, (iii) tick seasonal activity, (iv) tick phenotype/genotype, and/or (v) tick microbiota. Evidence for such signs of change will be discussed and the spotlight turned on Australia to see what the signs are there.
Pat Nuttall is Emeritus Professor of Arbovirology in the Zoology Department, University of Oxford, and Fellow of Wolfson College, Oxford. Current research interests are in viruses transmitted by ticks, and how tick saliva promotes virus transmission. Prior to re-joining the University of Oxford in 2013, she was employed by the UK’s Natural Environment Research Council, becoming Director of the Institute of Virology & Environmental Microbiology in 1995 and Director of the Centre for Ecology & Hydrology in 2001. In 1993, she was a visiting scientist at CSIRO Indooroopilly where she worked with Peter Willadsen and David Kemp. Her research resulted in the first NERC spin out company, Evolutec Ltd. Distinctions include: Ivanovsky Medal for Virology, Russian Academy of Sciences; Order of the British Empire (OBE) for services to environmental sciences; LeConte Scholar, Georgia Southern University, USA; Honorary Professor, Nankia University, China; Chevalier dans l’ordre du Mérite Agricole, France; Harry Hoogstraal medal, American Society of Tropical Medicine & Hygiene.
The seminar will end with panel discussion.
Awesome image by Thorey Jonsdottir, Burnet Institute.